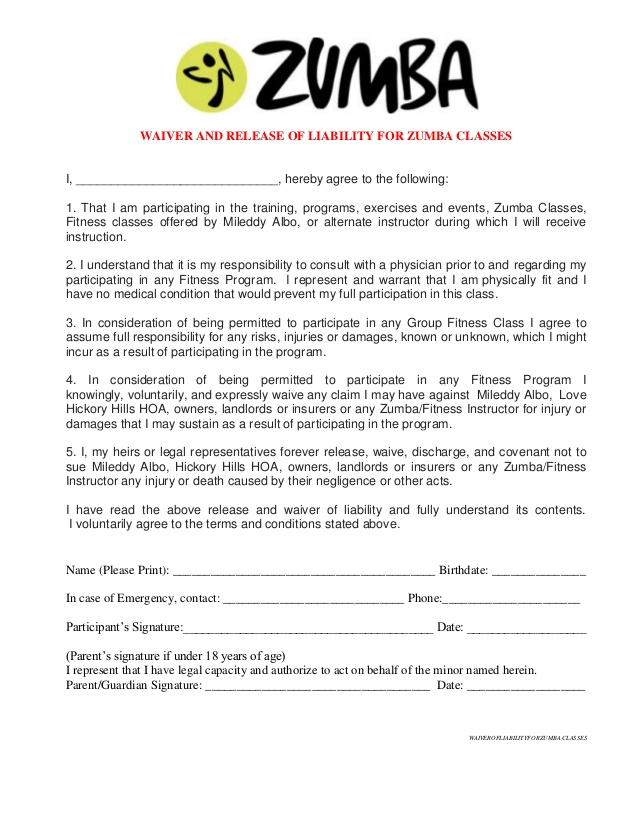 Release forms or liability agreements are used by a variety of sports related / fitness, gym facilities in an attempt to limit (or release altogether) the if a customer is injured on the premises, or as a result of the business’s services. In some contexts, a release agreement will use language to indicate that the person signing the agreement has “assumed the risk” of being injured.

Or let’s say you are participating in a biggest loser challenge at your local gym. The club may have you sign a”harmless clause” in its contract to prevent you from suing if they are injured in the training program. Essentially, this clause would require the member to accept all risks associated with the activity, including the risks of injury or death.

When it comes to liability for a fitness injury, release forms can significantly alter the legal relationship between a member and a business. Generally speaking, however, most states do not enforce releases. Some do like Florida, however there are many ways to overcome this ruling.

Release Form Language to be Avoided

A release is essentially a contract that attempts to excuse a business, for injuries to a person that arise out of the foreseeable and unenforceable risks in an activity. In order to make sure your gym or fitness center is legally protected, you’ll need a well-drafted document. I personally have seen over 100 in the last 30 years, most fall short of being well drafted.

Here are some common pitfalls that should be avoided:

There are more subtle legal issues though, when it comes to whether or not a release will be enforced. A minor usually cannot legally release his or her rights. Only the minor’s parent or guardian can do so. So, a release signed only by the minor is not enforceable. In addition, the release must be signed before any injury has occurred. A fitness center that allows a customer to sign a release “later” may be unpleasantly surprised when an injury occurs before the member ever gets around to signing the release.

Another important concern is keeping the release where it can be located later. If a customer signs a release but does not sue for injuries until years later, the release is only useful if it can be produced for the court. If the release has been lost, the entente may face liability that could have been avoided.

As an expert witness I have done my own independent investigations regarding release, and or waiver forms. I have found many ways, specific to circumstances to override the state law, based on solid evidence, and causation.

If you need an expert witness in the fitness industry, I will consult with you, your firm for free at 203-675-557